This is a shade of white with a mother of pearl/metallic effect. The work surface in this Italian design kitchen had to be made of Corian® as the countertop for the island is 370cm long. This length can be manufactured in one piece using Corian®. Incidentally, Corian® is not the same as a composite. 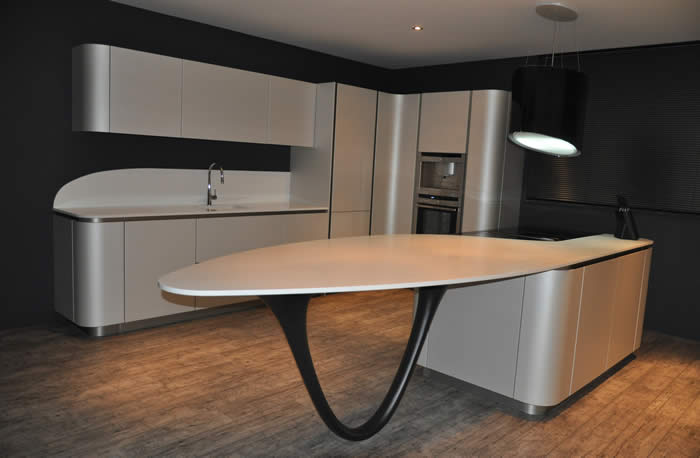 This Ola 20 fitted kitchen is in a matt micaceous paint (Bianco Nordic). 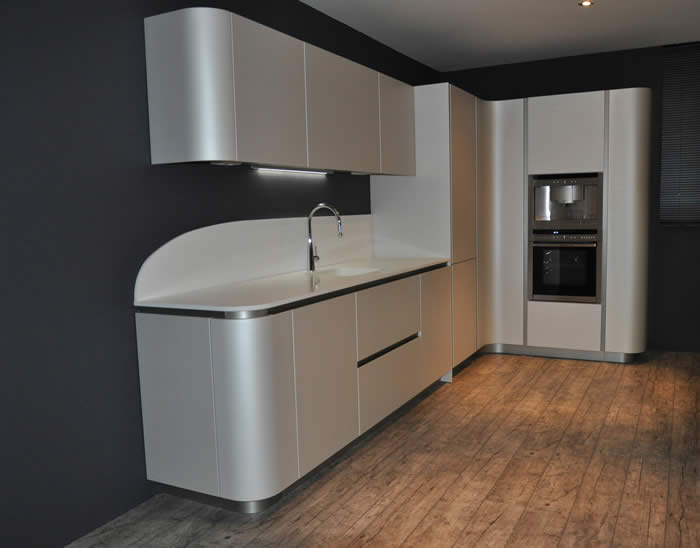 The work surface in this Italian design kitchen had to be made of Corian®. 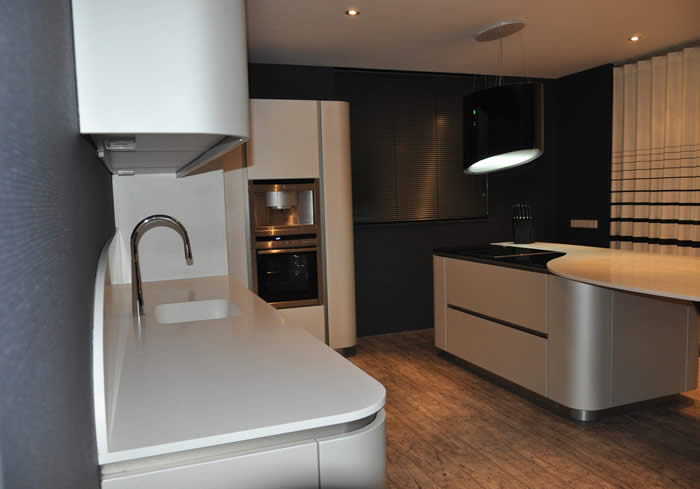 A Snaidero Spring extractor hood with bipolar ionisation is suspended above the island.

The new Italian design kitchen being delivered to the client. 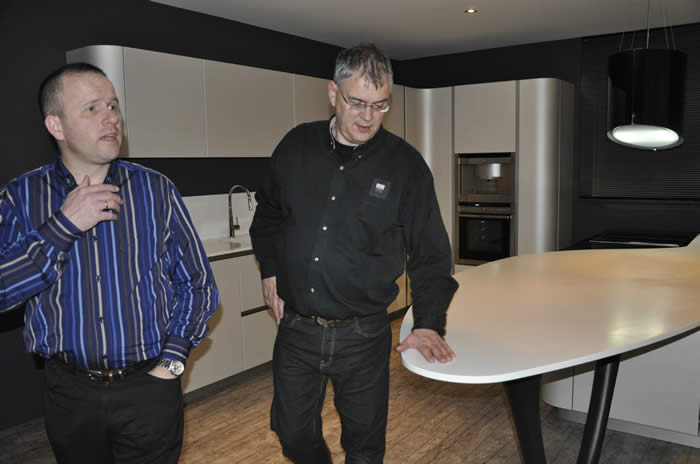 A special Pininfarina table leg in Dark Ash is fitted beneath the overhang of the Corian® work surface. 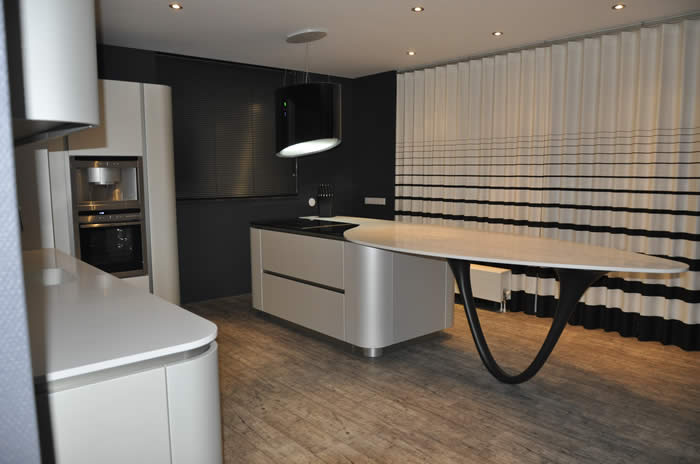 As the drawers are rather large and broad, they are also quite heavy when filled. They are therefore fitted with an automatic electrical) opening system. Highly luxurious. 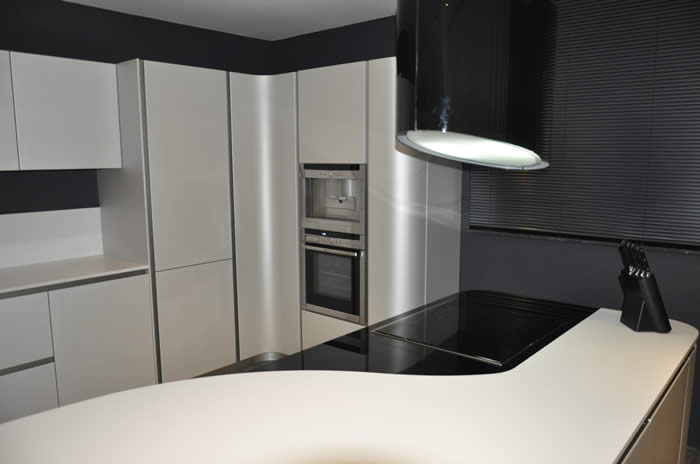 The glazed surface of the Neff induction hob blends almost seamlessly with the Corian® work surface. 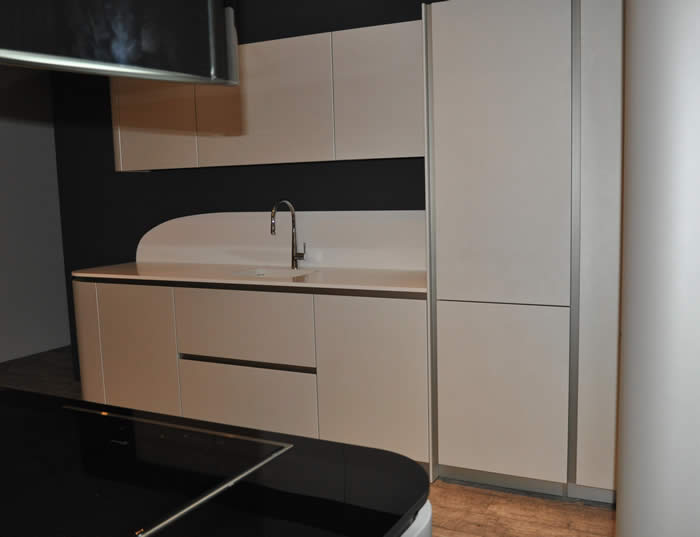 The sink is also made of Corian®, and is fitted with a Prospero Rasulo, Fontana Luce tap. 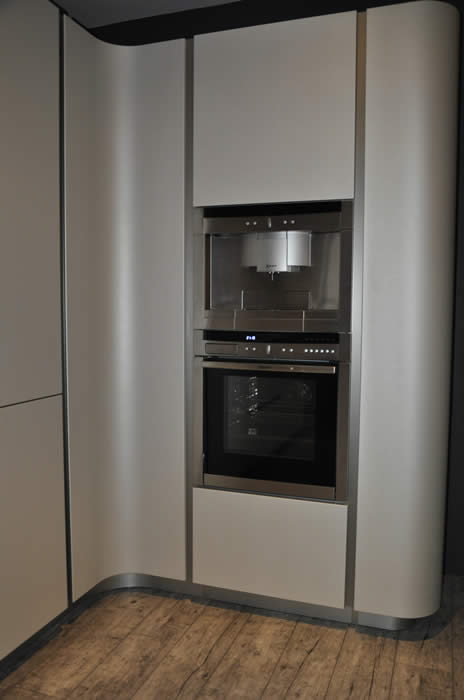 The Neff appliances are stacked on top of one another. The large Neff B46C74N3 VarioSteam oven is fitted beneath the coffee machine.

The pictures below were taken before and after the installation of this kitchen: 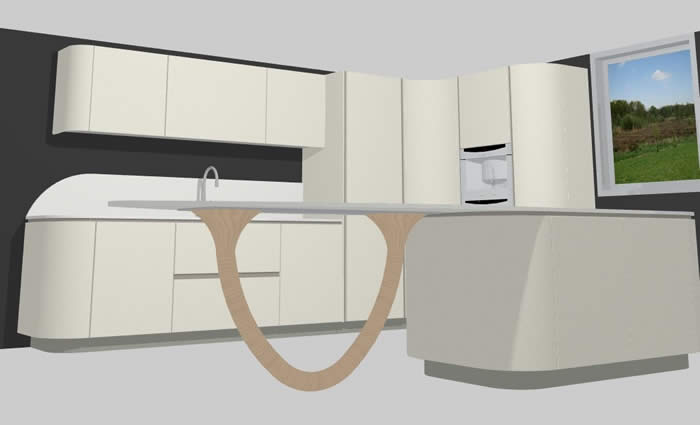 Technical drawing of the Ola 20 kitchen that we made in advance. This drawing was produced using our previous software package (Winddesign). 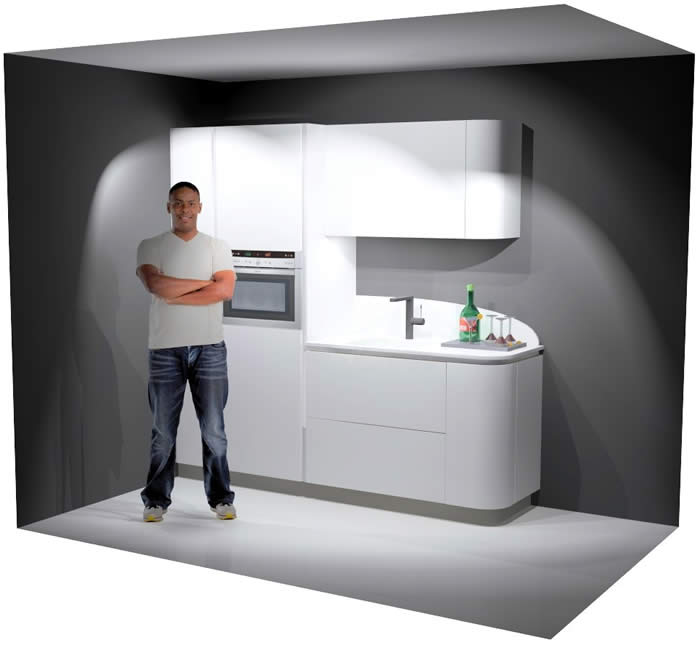 An additional unit comprising Snaidero Ola 20 cupboards was ordered for the scullery. 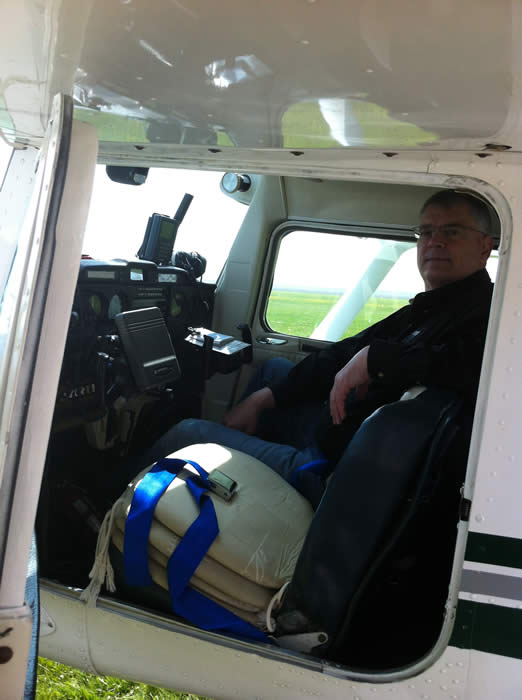 We took this customer on a flight over Zeeland aboard our Cessna. 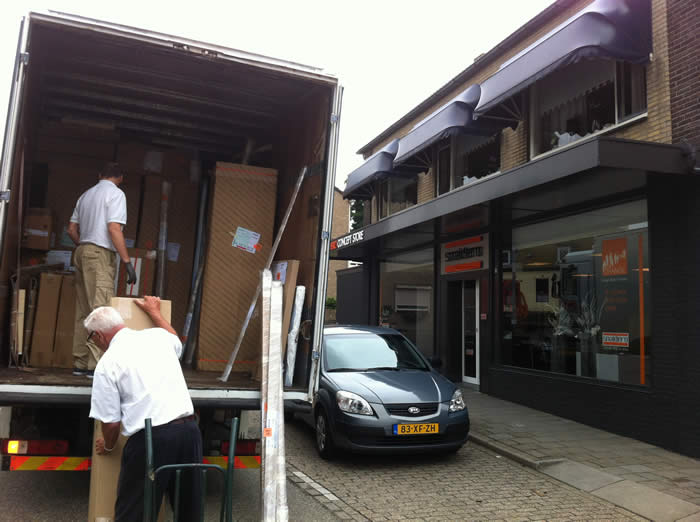 The new kitchen being delivered to the Snaidero Concept Store showroom in Arnemuiden, the Netherlands.

The Corian® work surface for the island measures an incredible 370cm long. Thankfully, it had been carefully packaged. 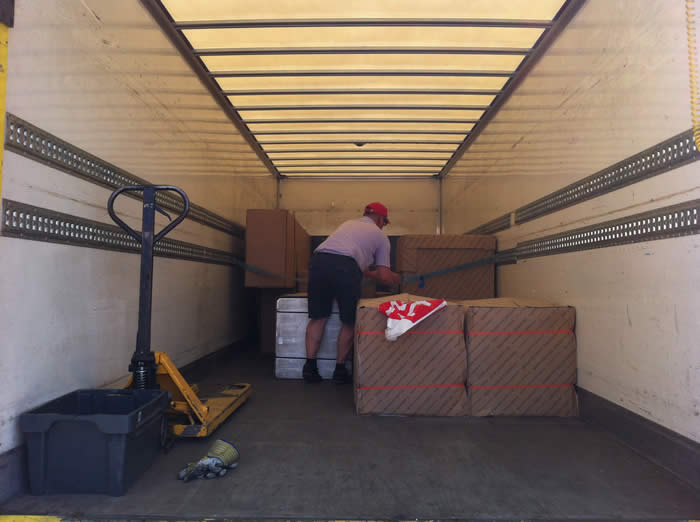 Because it is so large, we opted to deliver the kitchen for this project in two separate consignments. 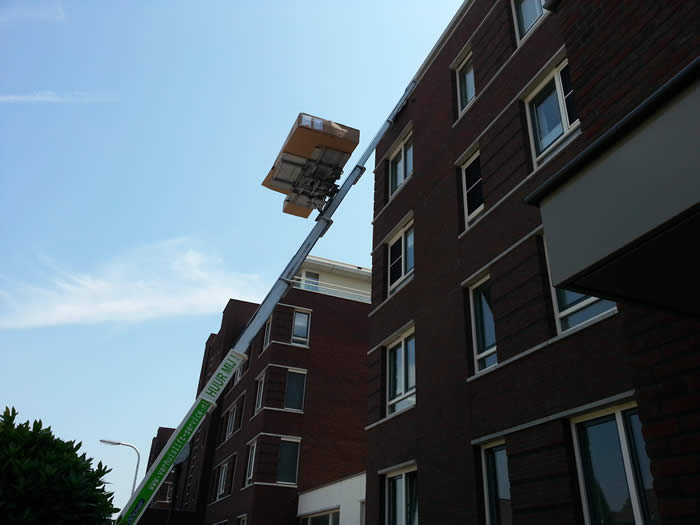 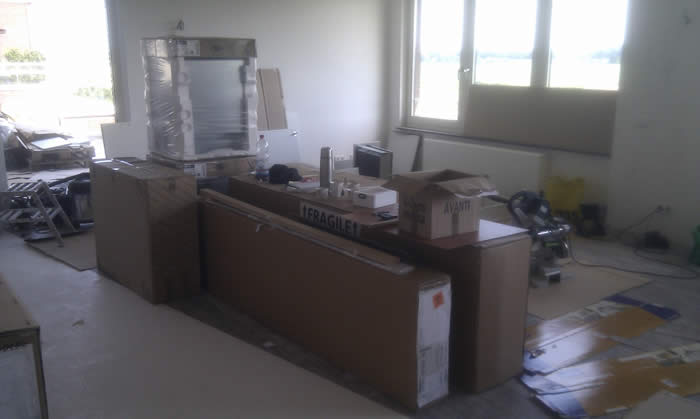 The kitchen in place upstairs. 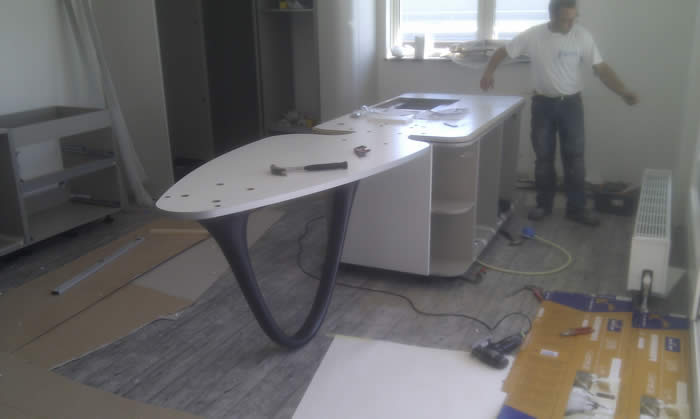 The Corian® work surface was placed on a sort of support plate for additional stability. 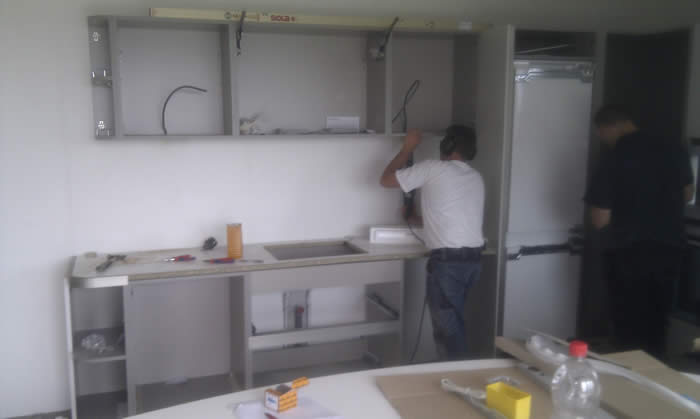 Jan and Joop (the fitters) set to work. 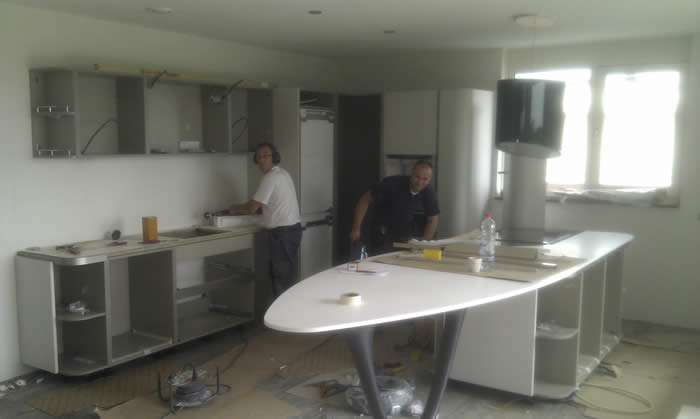 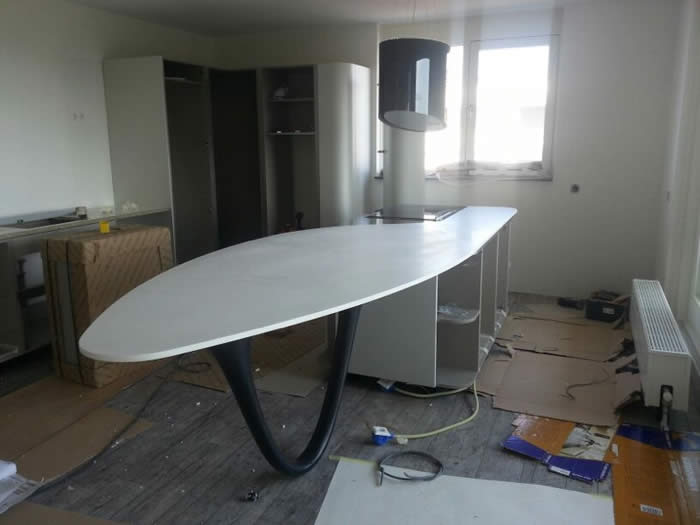 A large overhanging table top with a special Pininfarina leg was added to the island. 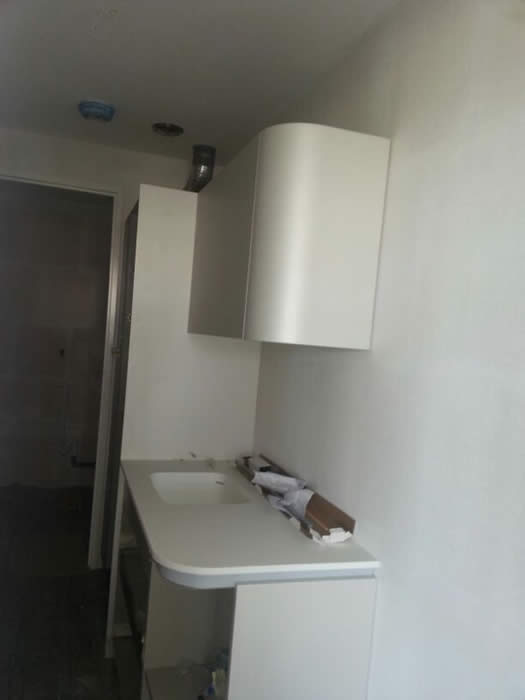 An additional unit, also comprising Snaidero Ola 20 cupboards, was fitted in the scullery. 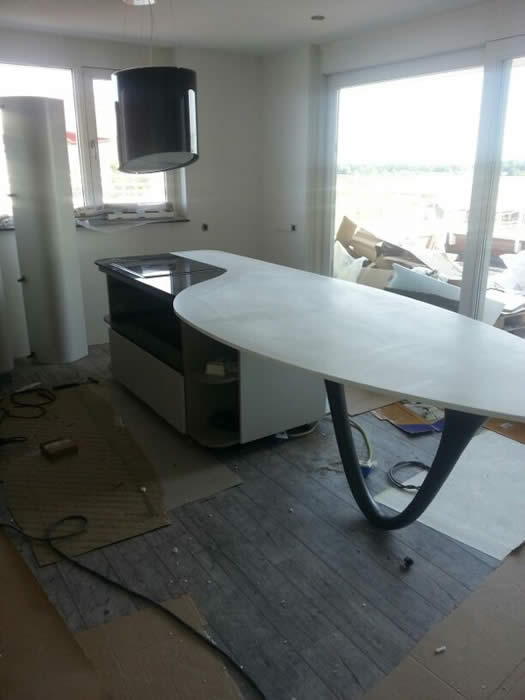 A black glazed section was fitted around the hob in the island. This lends it a rather playful appearance. 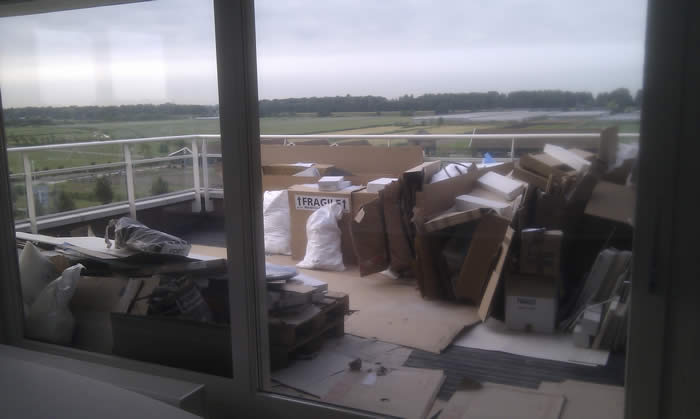 The waste materials from installation of the kitchen have already been removed ☺. 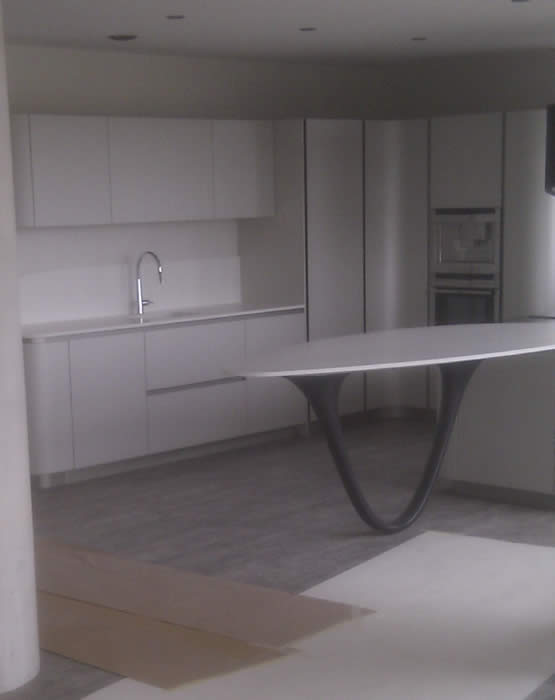 The kitchen is finished. It looks truly splendid. 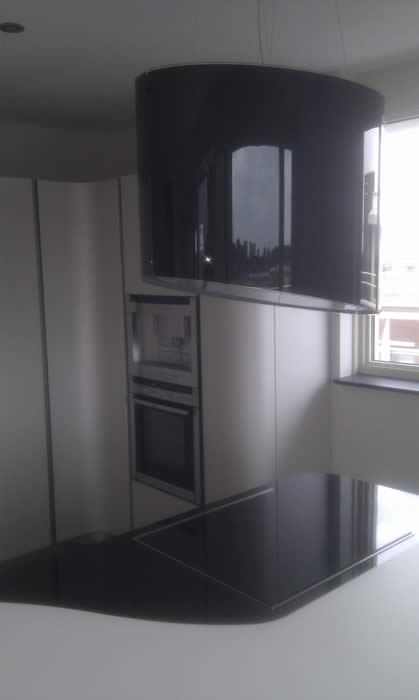 As the Snaidero Spring extractor hood is fitted with a Bipolar Ionisation system no external extraction duct is required. 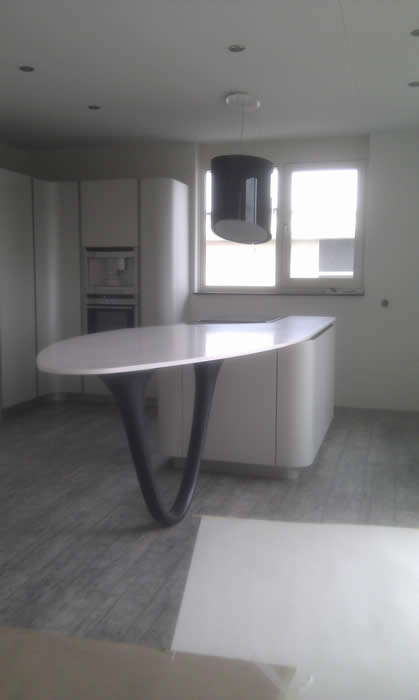 We consciously opted to fit a dark-coloured wooden leg beneath the work surface, as it nicely matches the flooring. 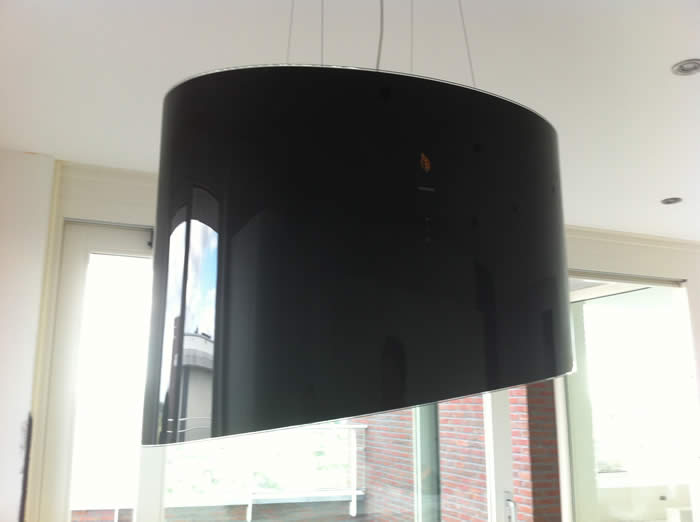 The Spring extractor hood has now been connected. You can see that the leaf is no longer green. This is due to the fumes spread by the painter working in the kitchen. The extractor hood detects these fumes and neutralises them by means of bipolar ionisation. 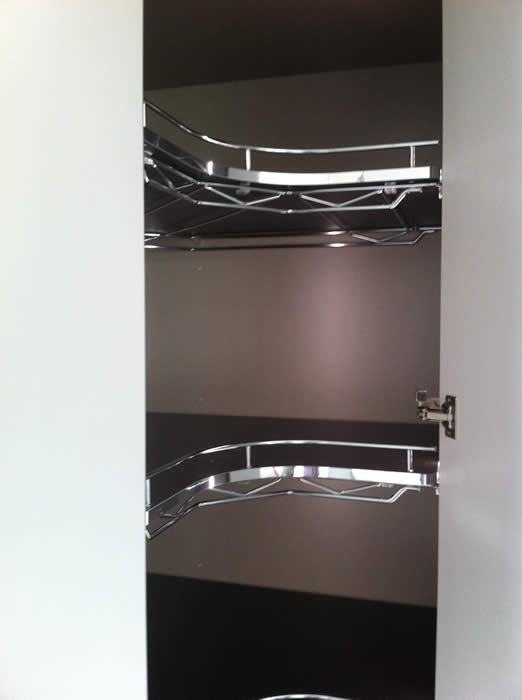 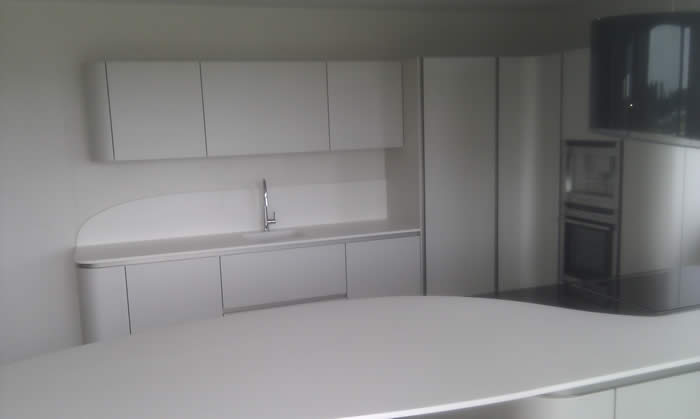 The kitchen is now complete. The painting is now all that remains to be done. 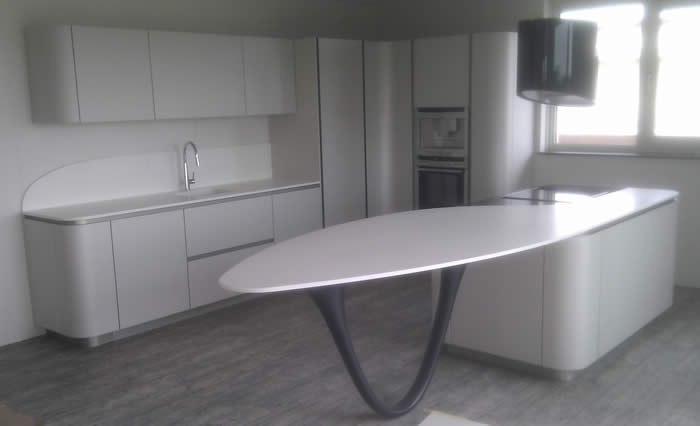 The work surface in this Snaidero Ola 20 kitchen comprises a combination of black glass and Corian®. 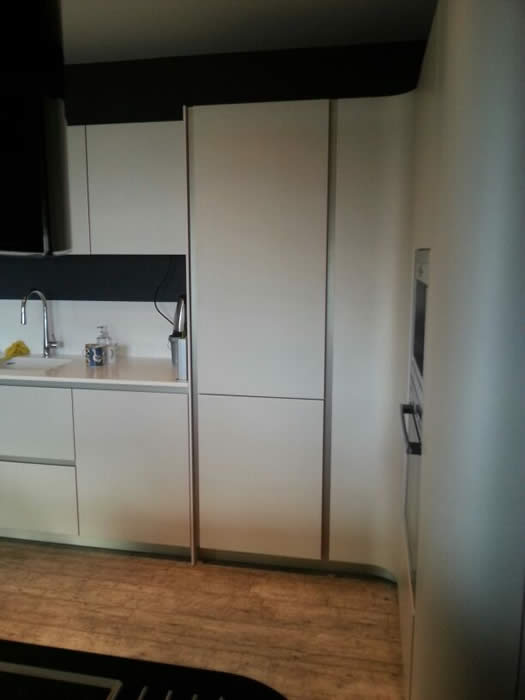 The walls have now also been painted in the same shade as in the showroom. This greatly enhances the appearance of the kitchen.

Check out the video of the Spring extractor hood with Bipolar Ionisation below:

Kitchen of the month

New in the Snaidero Concept Store: the model Snaidero Vision with Gaggenau equipment. The doors are painted in a matt micalak and the worktop is made of Corian. Now for € 38.900,-.